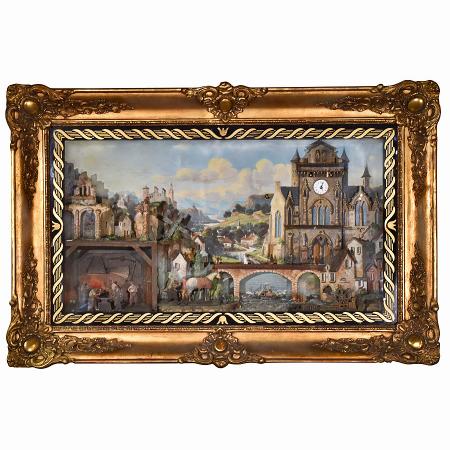 This wondrous French animated musical painting clock depicts a rural town set in the mountains. An 8 day striking clock resides in the church tower, and a second clockwork mechanism plays as the bell tower on tuned rods.

The animation itself is driven by two additional clockwork mechanisms. To the left of the scene is a blacksmith shop with a worker pumping a bellows, and another forging horseshoes at an anvil. Outside the shop is a horse being shod who nods his head, while an onlooking dog wags his tail. Within the landscape is a spinning windmill and turning waterwheel. A procession of people cross the bridge while boats float down the river below.

The complex diorama of motion is accompanied by a large cylinder music box playing four tunes at will.

Animated clocks are among the rarest and highly desirable on the market, but one that features music, and artistic skill is genuinely extraordinary. Clocks of this caliber were the markers of wealth and status in their day. Only the most affluent of society could afford the expense of commissioning a clock of such complexity. These mechanical marvels stand the test of time and still leave us in awe today.