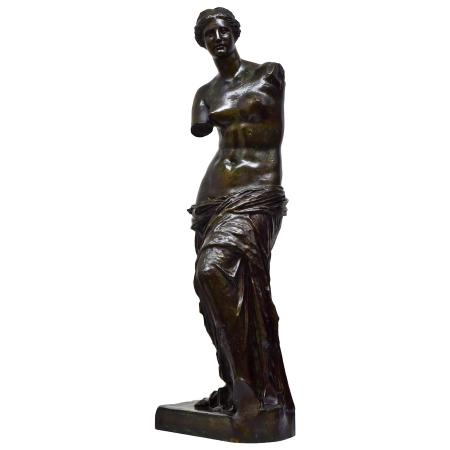 The Venus de Milo statue is one of the most famous sculptures in history. The original white marble statue resides in the Louvre Museum in Paris and stands 6 feet, 8 inches tall. It was created during the late second century BC, likely by Alexandros of Antioch. The sensual, partially clad female figure poses in a classical S-curve. The Venus de Milo represents one of the great treasures of ancient Greece. She epitomizes female beauty with a fusion of grandeur and grace.

Additionally, the foundry mark F. Barbedienne Fondeur appears on the base. The Barbedienne bronze foundry, established in Paris in 1839, quickly became world renowned in creating statues and other art objects.The Barbedienne foundry attended every World’s Fair of its time. Most noteworthy, Barbedienne received the Great Medal of Honor at the 1855 World’s Fair.

This exquisite French cast bronze version stands over three feet tall and would make a stunning addition to any decor.

SKU: WIAU 4 P $2,850
If you are interested in similar items, please contact us through our website or phone the Renaissance Showroom at 805-688-1976, open seven days a week from 10 to 6.
Copyright 2021. Renaissance Antiques.
All rights reserved